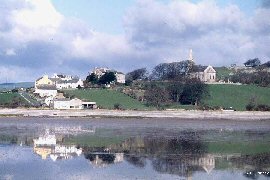 Bardsea from Morecambe BayBardsea is mentioned in the Domesday Book as one of the townships forming the Manor of Hougun held by Earl Tostig. Bardsea was a small farming and fishing village well into the nineteenth century.

It was accessed mainly by crossing the treacherous sands of Morecambe Bay. The church of Holy Trinity was consecrated in 1853: previously the area had been included within the parish of Urswick.

Bardsea village is draped across the western side of a distinctly contoured drumlin, the summit of which is the location for the village’s 1853 Holy Trinity church. By-passed by the A5087 road, which provides the coastal route alongside Morecambe Bay between Ulverston and Barrow in Furness, Bardsea enjoys an appreciably lower volume of through traffic than the other villages in the parish. 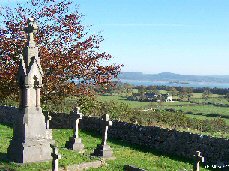 Morecambe Bay from Bardsea ChurchThe elevated position of the village affords quite spectacular views across the bay as well as to the Lake District hills to the north.

The village grew significantly during the second half of the 20th century but remains without a shop or school, although it retains a stone built village hall which once served as the village school. 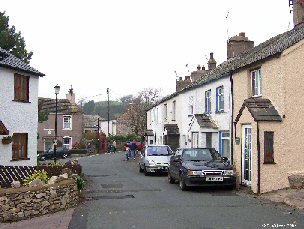 Bardsea Village
The village is popular with visitors in summer months and has two pubs with restaurant facilities. Even more visitors congregate on the shore to enjoy the ever changing vista across Morecambe Bay.

The Cumbrian Coastal Way passes along the entire length of the parish’s shoreline at Bardsea, but immediately inland the village also enjoys a magnificent array of walks across Birkrigg Common. This bracken covered elevated ground is grazed by the sheep of adjoining farms and is home to the standing stone circle known locally as the Druid’s Circle.

The common also displays a fine collection of limestone pavements within the grikes of which may be seen the trapped lakeland volcanic stones left behind by the passing glaciers. Now protected by law, the pavement areas were once the source of stone, sculpted by dissolution as mildly acidic water drained from the surface above, quite commonly seen topping garden walls across the district.

The area around Bardsea is blessed with the largest concentrations of mature trees to be seen throughout rural Low Furness, notwithstanding that the magnificent ancient woodland of Sea Wood is actually in the neighbouring parish of Aldingham.

Bardsea is a truly delightful small village, which in company with the nearby hamlets of Bardsea Green and Well House possesses a peaceful ambience not easily found in modern times. Whilst being surrounded by agriculture, the village no longer has a working farm within its boundary. A small industrial site between the village and the coast does not impinge on either the amenity of the village or the aesthetic of the coast. On the northern boundary of the village is to be found Ulverston Golf Club, the fairways of which provide wonderful views across the surrounding countryside and Morecambe Bay.