Great Urswick is an ancient village nestling beneath steeply rising ground to the north and east, where its original field patterns ascend the sloping ground like a radiating fan from the settlement below. The village occupies three sides of a 5.7 hectare marl tarn, the heritage bequeathed to the village by glacial action and now an important ecological asset. 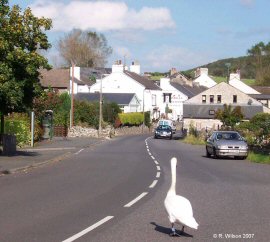 Church RoadWhilst still being small, with around 230 dwellings, the village is the largest settlement in the parish. It has two pubs, a restaurant converted from one of its six former working farms, a garage, Low Furness Church of England Primary School, and the only shop/post office in the parish.

There is a daytime 2 hourly bus service that connects the village with Barrow and Ulverston.

There is a village hall which has a stage and plays host to community groups such as toddlers,bowling, badminton and the local Womens Institute. The Church also has its Parish Rooms that are used for Brownies and coffee mornings. There is a playground with good facilities for young children adjacent to the school 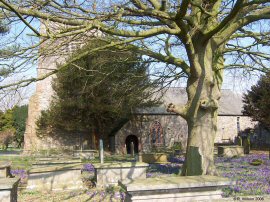 Parish Church
The parish church of St. Mary and St. Michael is believed to have its origins as far back as the 7th or 8th Century and therefore pre-dates the rich and hugely influential Cistercian Furness Abbey, 5.6 km to the southwest, by a considerable margin.

The structure has been upgraded many times over the ages, but its great age touches the senses of all who visit this centre of spirituality to the countless generations of Urswick residents who worshipped here over the millennia.

The annual carpet of crocuses in the churchyard is a sure telegraph of approaching Spring and its ancient sundial an icon of life’s passage.

Low Furness Church of England Primary School is located between the two villages of Great Urswick and Little Urswick and was opened in 1994. As implied by its name, it serves an area of rural Low Furness beyond the Parish of Urswick.

When its pupils reach the age of eleven it is normal for them to transfer to Ulverston Victoria High School, four miles away in the market town of Ulverston.