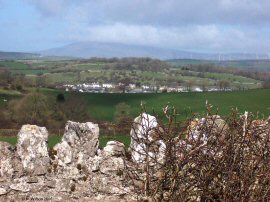 Little Urswick from Scales RoadLittle Urswick is a distinct and separate village in its own right, one mile from Great Urswick. It has 114 dwellings, an increase of around 62 over living memory.

Known in the area for many years, when the rural villages were home to a continuity of resident families and a local dialect still prevailed, as Lile Ossick, the history of this village appears to at least equal the age of its larger neighbour, Gt Ossick. 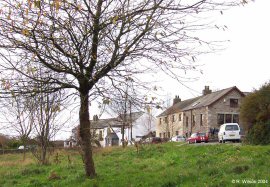 Village Green
The centre-piece is the village green, in reality, a thin covering of soil and now well cared for grass over an extensive outcrop of Urswick Limestone Formation, which still, character-fully, presents itself through a few ‘bald’ areas on the green.

As with the local dialect, the village has lost its pub, The Swan, which neighbored the school overlooking the village green.

In the early 1900s the green would become the annual short term bed and breakfast accommodation for large numbers of geese brought over from Ireland and taken from village to village throughout the area to be sold to local people.

One can only imagine the noise that geese in those numbers would make, and the relief that those living around the green would feel when they moved on to another village and peace returned. 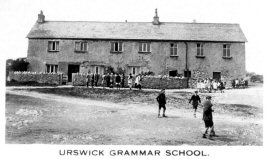 With a charter signed by Queen Elizabeth I and dating from 1585, there can be very few villages of the small size of Little Urswick that have, or have had, a Free Grammar School in continuous use for 409 years. 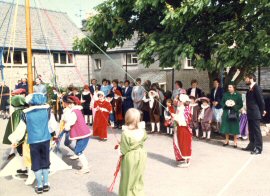 Village children performing for HM Queen Elizabeth II
On the occasion of the school’s 400th anniversary in 1985, it was visited by H.M. Queen Elizabeth II, but nine years later it was to close in favour of a modern building in Great Urswick.

The structure of the school buildings has survived as a conversion to three private dwellings, amongst which the original Free Grammar School, renamed as White Rose Cottage, identifies itself by a 1585 date stone. 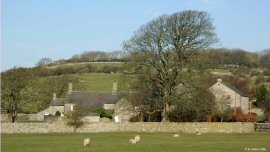 Redmayne Hall, Little Urswick
As recently as fifty years ago, this village, then of around fifty dwellings, included six working farms within its boundary. These included Redmayne Hall which, whilst no longer a working farm, has been wonderfully conserved by its present owner, as the farmstead that it was, possibly dating from Elizabethan times.

Only one working farm still tentatively remains within the boundary of the village. Agriculture is still very evident throughout the parish, but is now focused on fewer units, usually operating outside of the main settlements.